The Lookout Station has provided support to Contrast VR of Al Jazeera for The Disappearing Oasis, a new virtual reality film on M’hamid El Ghizlane, an oasis in southeast Morocco that has been affected by climate change and threatened by the encroaching Sahara.

Since the launch last year, the Lookout Station has focused on offering support to media so that they can experiment and produce immersive stories on climate change. This partnership project with Contrast VR follows two predecessors developed and produced by Euronews and The Guardian. In addition to one-to-one media partnerships, the Lookout Station has developed Lookout360, a 6-month Immersive Story Accelerator together with the Global Editors' Network to provide training and mentorship support for 12 journalists from 12 media houses so that they can master how to tell stories about climate change through 360 videos.

The Disappearing Oasis can be watched on Contrast VR's website.

Does immersive storytelling, and VR in particular hold the key to the future of storytelling and public engagement? Especially in the context of climate change?

We've interviewed Viktorija Mickute, who has directed and produced The Disappearing Oasis to get her views about immersive storytelling and how science and research communities can work together better with the media so that journalists can produce more engaging stories using new technologies.

Why do you think Virtual Reality is a powerful medium?

Rather than being detached observers, using virtual reality, viewers have an opportunity to 'step into' the story and see it with their own eyes. Often, important stories, especially the ones on climate change, unfold in remote and difficult to reach areas. The VR technology transports viewers so that they can see the location, witness the processes there and meet people whose lives are affected. This gives viewers a deeper understanding of the issue.

What impacts have your team's VR pieces made?

With partners' help, our VR films are distributed widely around the world and gather millions of views. We think it is important to make VR pieces as accessible as possible to everyone, no matter if they have VR headsets or only a smartphone. This way the story reaches as many eyes and ears as possible, and VR technology is introduced to the places where it is not widely understood and used yet. It is also very important how impactful the views are. We showed Forced to Flee, our VR film about Rohingya refugees, to a few members of the UN Security Council. After the screening, Amnesty International presented them with a list of recommendations on how to respond to the Rohingya refugee crisis. After seeing another film, I Am Rohingya, Raw in War, an organization supporting female human rights defenders, recognized Jamalida Begum, the main character of the film, as a Brave Voice Refusing to be Silenced during their awards ceremony in London.

Viktorija has shared her challenges of producing climate change story in a short VR film during the panel, "Connecting science and journalism though climate change and digital innovation" at the International Journalism Festival held on 12 April 2018 in Perugia.

How do you see the role of scientists and researchers in supporting journalists tell stories?

As journalists, we must base our reporting on facts and be as accurate as possible. No matter if we cover a science conference, or if we produce a human-interested VR film, the ethics are the same. Scientists and researchers can help us fulfil our roles and our communication could be very fruitful. However, in order to do that, we need to understand each other better and be aware of different languages (science vs journalism) we use and different goals we have. Patience and trust is needed from both sides.

"Scientists and researchers can help us fulfil our roles. However, we need to understand each other better and be aware of different languages. Patience and trust is needed from both sides."
Viktorija Mickute
Producer, Al Jazeera's Contrast VR

Any tips for those who are planning VR production focusing on climate change?

Filming in 360, location is very important, visuals drive this medium and it is essential to keep this in mind when looking for a story and planning the shoot. However, don't just travel somewhere for the sake of traveling and getting some stunning 360 footage. VR technology can help you tell a story and make it even more powerful, but people and their experience dealing with climate change on a daily basis is what you should focus on, first and foremost. Also, don't chase the most well-known stories. Climate change affects communities in very different ways and there are so many issues and regions we should be talking about. 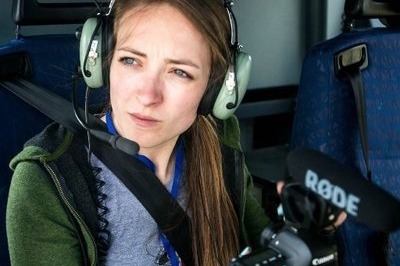 Viktorija Mickute is a Lithuanian journalist currently working as a producer at Contrast VR. With a background in documentary filmmaking, she is driven by new visual technologies and innovative ways of storytelling they enable. Viktorija has professional experience in both national and international media organizations and was awarded with a Fulbright scholarship to receive a journalism master’s degree in the University of Missouri, U.S. Before joining Contrast VR, she hosted a social media live TV show at Lithuanian National Television. She also worked as an international news editor and reporter, covered many international events and crises, such as Brussels terror attacks in 2016, Syrian refugees in southeastern Turkey near the Syrian border, and the NATO meeting in Brussels in 2017.